Steven G. Lowe and C. Anthony Chase formed Last Chance Productions Film Partners, LLC in 1996 with the vision to create, develop, and produce television and feature films that tell entertaining, inspirational, and value driven stories. It’s about the journey; LCP desires to work alongside others who share in the same dream of movie making magic.

Last Chance Productions Film Partners, LLC has invested the past 20 years building meaningful, long lasting relationships with respected professionals across all aspects of the entertainment industry. In short, they take our calls. With years of collaboration, project development and hands-on experience; LCP Film Partners is now established as a trusted, knowledgeable, and bankable entity. We are now ready to launch!

Steven and Anthony began as writers, creating the television series, Last Chance (an edgy pilot about at-risk youth in a Group Home), which became the namesake for their company. Since then, LCP Film Partners has been creating high production value content and adding a variety of commercially marketable projects (i.e. film/TV – family friendly, comedy, drama) to our slate.

A producer, much like a general contractor, knows that when a foundation is solid and an infrastructure is true, the project will stand the test of time and circumstance. Similarly, if a script is sound (it takes years to track down the right screenplay) the end product will garner the reward of the efforts put in. As producers from the “school of hard knocks” – and after reviewing hundreds of scripts – we’ve learned the value of a dollar and whether or not a project has commercial viability and marketable success. One of the most significant functions of a producer is to reach out to those relationships they’ve built; then select, connect and hire the right team of entertainment professionals. Thereby, creating an environment where the production can flourish. LCP Film Partners, LLC is able to accomplish this charge with integrity and efficiency.

For the past several years LCP Film Partners, LLC in conjunction with The Actors Room has provided invaluable learning and educational opportunities for up-and-coming film students by mentoring and infusing them into all aspects of production. LCP Film Partners, LLC has a long history of community involvement and is associated with many worthy charitable organizations including SAFE (Suicide Awareness For Everyone), Mentors For Youth, and Los Angeles Mission.

We believe in God, family, and film… in that order.

“WHEN GIVEN AN OPPORTUNITY, DELIVER EXCELLENCE AND NEVER QUIT.”

Steven started his career as an on air personality and radio syndicated programming executive. He has a vast experience in all aspects of film development; business proposals, negotiations, and creating written content (film screenplays, TV scripts, new media content and original acting materials), and coaching. In addition, Steven has written, produced, and directed over 80 independent scenes for short films, commercials, new media, web series, branded entertainment, and acting reels. Steven pays particular attention to detail and has an amazing eye for visualization and conceptualization of the film’s style. As a communications major, his professional and personable approach to “getting the job done” has gained him the respect of many top professionals in the entertainment business. As an accomplished acting coach he has a unique perspective on an actor’s character development and internal authenticity, and is able to get the performer to achieve autonomy while on the set. As founder of the very successful and world-renowned “The Actors Room” Steven has coached many notable actors. Hundreds of entertainment professionals pack Steve’s widely anticipated annual acting/entertainment industry seminars and specialty classes – selling out consistently for the past 10 years. In addition, Steven has worked with the industry’s most distinguished, elite Casting Directors. As a Creator of television and film Steven has been writing and developing projects for over 20 years. As an author, Steven’s book, “The Actors Room – 50 Original Monologues & Tips For Success” was published in 2012 and rose to #3 on Amazon’s Best Seller List. Steven has produced several high concept celebrity-driven charity events, raising tens of thousands of dollars for these worthy causes and their surrounding communities. Prior to this he invested over 25 years in human behavioral studies; where he counseled severely emotionally disturbed youths/families. Steven has been awarded Orange County’s “One-On-One Counselor of the Year,” the California “Gold Award,” and received a “Humanitarian Award” from Anaheim Mayor, Curt Pringle, for recognition of outstanding service to youth and the North Orange County community. 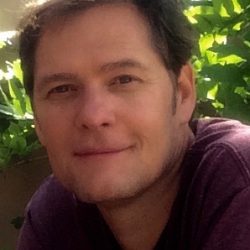 Anthony adds his creative screenwriting and “on-set” talent and production experience to every project. Anthony has been on over 200 television and commercial sets and over 100 film productions in Hollywood, serving the film community as a SAG/AFTRA member, principal producer and crewmember. Anthony has acted in several major TV shows and feature films such as “City of Angels”, “Frasier”, “Fight Club”, “Face Off”, and “As Good As It Gets” to name a few. Anthony’s extensive educational background in Psychology, Communications, Religion, Philosophy and Ethics makes him irreplaceable in business negotiations, creating business proposals, and on-set organization. His unique and genuine ability for “Hollywood Speak” is invaluable when communicating with talent and industry professionals. While studying in Chicago 1987-88, Anthony served as a peace mediator between leaders of rival gangs. He has since worked in the mental health field of for over 19 years as an Emergency Response, Forensic, Adoption, and Crisis Counselor as a Children’s Social Worker III for Los Angeles County, Maui County and Orange County. As a creator of television and film projects for the past 20 years, Anthony lends his experience to the entire production process in a fresh and unique way.